Coffee at its finest
By Kim Bo-eun

What is better than a hot cup of coffee on a chilly autumn morning?
For some, regular coffee is enough for their daily dose of caffeine. For others, the pursuit is for richer aromas and deeper flavors, even if it means paying a premium.

Among the premium coffees, “specialty coffee” is gaining appreciation among more discerning palates.

While there is no set definition for the term, it generally refers to coffee that best brings out the unique taste of the roasted green bean. Along with the great taste and quality, specialty coffee also comes with ethical benefits. By identifying its origins, from the country to the specific plot of land to farmer, it establishes a connection between the producer and consumer in their disparate socio-economic environments.

A host of cafés now offer the higher quality alternative not only in the capital, but also in cities across the country. Here are some that could be considered the pioneers of specialty coffee in Korea. 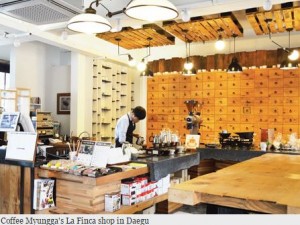 Coffee Myungga
Ahn Myung-kyu, owner of Coffee Myungga, was among the first to introduce specialty coffee in the country. After studying coffee making in Japan in his early 20s, he started his shop by Kyungpook National University in Daegu, some 300 kilometers southeast from the capital. This was back in the 1990s, when coffee meant the instant mix of coffee powder, non-dairy creamer and sugar in dark, smoky shops called “dabang.” Obviously, there was no interest in quality coffee that cost several times that of the mainstream coffee back then.

However, a pool of loyal customers formed after Ahn opened the shop in Daegu’s main commercial district of Dongseong-ro. This happened as he started traveling to coffee farms around the world to directly import the green beans instead of having to buy them through agencies based in Japan. Direct imports enabled Ahn to cut the retail cycle from a full year to four months.

“Good coffee is made from fresh, quality beans. Importing directly from the farms is what really elevated the taste of our coffee and attracted customers,” said Choi Yun-jeong of Coffee Myungga’s management support team. 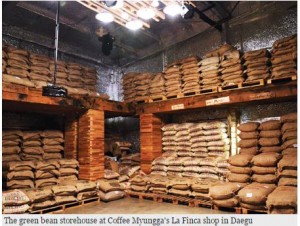 The coffee shop now has 38 shops in and around Daegu and an exclusive contract with three farms – Guatemala’s El Injerto, El Salvador’s Café Pacas and Columbia’s San Alberto.

Ahn was away on a tour to overseas coffee farms during this reporter’s visit to Coffee Myungga’s La Finca shop. He spends much of his time abroad at the farms, and this is essentially what specialty coffee is all about.

The playground Coffee Myungga built for children at the El Injerto farm in Guatemala is part of such efforts, and the company says it will continue its endeavors to improve the lives of producers. 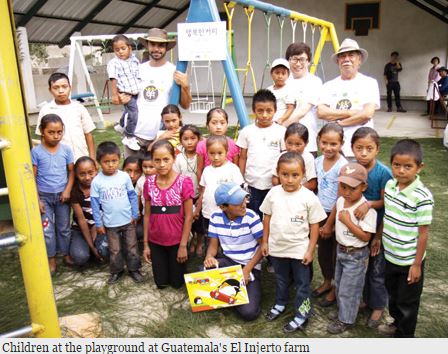